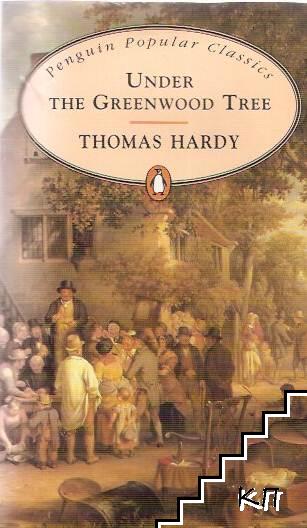 Under the Greenwood Tree

This story of the Mellstock Quire and its old established west-
gallery musicians, with some supplementary descriptions of similar
officials in Two on a Tower, A Few Crusted Characters, and other
places, is intended to be a fairly true picture, at first hand, of
the personages, ways, and customs which were common among such
orchestral bodies in the villages of fifty or sixty years ago.

One is inclined to regret the displacement of these ecclesiastical
bandsmen by an isolated organist (often at first a barrel-organist)
or harmonium player; and despite certain advantages in point of
control and accomplishment which were, no doubt, secured by
installing the single artist, the change has tended to stultify the
professed aims of the clergy, its direct result being to curtail and
extinguish the interest of parishioners in church doings. Under the
old plan, from half a dozen to ten full-grown players, in addition
to the numerous more or less grown-up singers, were officially
occupied with the Sunday routine, and concerned in trying their best
to make it an artistic outcome of the combined musical taste of the
congregation. With a musical executive limited, as it mostly is
limited now, to the parson's wife or daughter and the school-
children, or to the school-teacher and the children, an important
union of interests has disappeared.

The zest of these bygone instrumentalists must have been keen and
staying to take them, as it did, on foot every Sunday after a
toilsome week, through all weathers, to the church, which often lay
at a distance from their homes. They usually received so little in
payment for their performances that their efforts were really a
labour of love. In the parish I had in my mind when writing the
present tale, the gratuities received yearly by the musicians at
Christmas were somewhat as follows: From the manor-house ten
shillings and a supper; from the vicar ten shillings; from the
farmers five shillings each; from each cottage-household one
shilling; amounting altogether to not more than ten shillings a head
annually--just enough, as an old executant told me, to pay for their
fiddle-strings, repairs, rosin, and music-paper (which they mostly
ruled themselves). Their music in those days was all in their own
manuscript, copied in the evenings after work, and their music-books
were home-bound.

It was customary to inscribe a few jigs, reels, horn-pipes, and
ballads in the same book, by beginning it at the other end, the
insertions being continued from front and back till sacred and
secular met together in the middle, often with bizarre effect, the
words of some of the songs exhibiting that ancient and broad humour
which our grandfathers, and possibly grandmothers, took delight in,
and is in these days unquotable.

The aforesaid fiddle-strings, rosin, and music-paper were supplied
by a pedlar, who travelled exclusively in such wares from parish to
parish, coming to each village about every six months. Tales are
told of the consternation once caused among the church fiddlers
when, on the occasion of their producing a new Christmas anthem, he
did not come to time, owing to being snowed up on the downs, and the
straits they were in through having to make shift with whipcord and
twine for strings. He was generally a musician himself, and
sometimes a composer in a small way, bringing his own new tunes, and
tempting each choir to adopt them for a consideration. Some of
these compositions which now lie before me, with their repetitions
of lines, half-lines, and half-words, their fugues and their
intermediate symphonies, are good singing still, though they would
hardly be admitted into such hymn-books as are popular in the
churches of fashionable society at the present time.